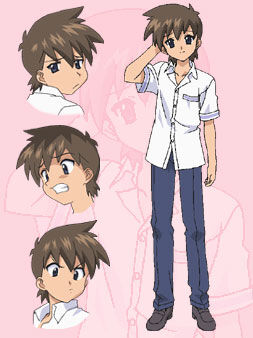 Kabuki Shikimori is the main character from Maburaho. He is in a love triangle between Kuriko Kazetsubaki, Rin Kamishiro, and Yuna Miyama.

The male protagonist, Kazuki, is a second year student from an elite magic school, Aoi Academy, with serious social problems, and because he has a low spell count of only eight spells, most of the other students, especially the girls, would not notice him. At the beginning of his second year it is revealed that he is descended from not only the most powerful of eastern mages, but the most powerful of western mages. Having both powerful bloodlines fused into one body means that despite his low spell count, he is capable of wielding nearly omnipotent power. He is therefore the most powerful character in the series. He is shown to have feelings for Yuna as her kiss along with Chihaya's brought him back to his human form. As a side effect, rather than losing his memories, he splits into ten individuals of himself, leaving each of his love interests a clone for each of (this split could be due to Kazuki's original spell count implied to having been 10).

Overall, Kazuki is a good person and helps others by using his magic, even when that means that he runs the risk of turning into ash. His selflessness and kindness eventually wins over the hearts of Rin and Kuriko. He is at times indecisive and not very courageous, but he prevalently shows his honest nature and his sense of doing the right thing. He is always being kind to others, and even though he may be scared he is a great friend.

Community content is available under CC-BY-SA unless otherwise noted.
Advertisement